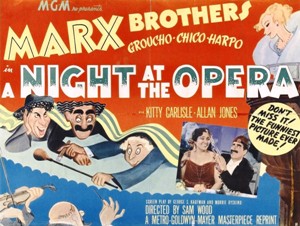 RiverRun Retro welcomes Christopher Hart, son of Moss Hart and Kitty Carlisle Hart, and Foster Hirsch, professor of film at Brooklyn College and author of 16 film and theatre books on Sunday, January 14 at 5:00 pm for a screening of A Night at the Opera at RED Cinemas in Greensboro. Hart’s mother, Kitty Carlisle, co-starred in the film. The screening will be followed by a discussion with Christopher Hart and Foster Hirsch.